Microsoft Teams is the next generation of collaboration tools for the modern workplace. When migrating to Microsoft Teams you do not want to sacrifice important PBX features. Until MachCloud Solution for Microsoft Teams, integrated support in Microsoft Teams for an existing PBX was not available such as retaining your existing phone number and dial by extension.

How does it work?

Microsoft Teams user is linked to an existing PBX extension for example 201. The username, password, and extension (201) of the user is entered in the self-service web portal. MachCloud’s geo-redundant platform ensures that the fixed device at the workplace is replaced by the Microsoft Teams user smartphone. 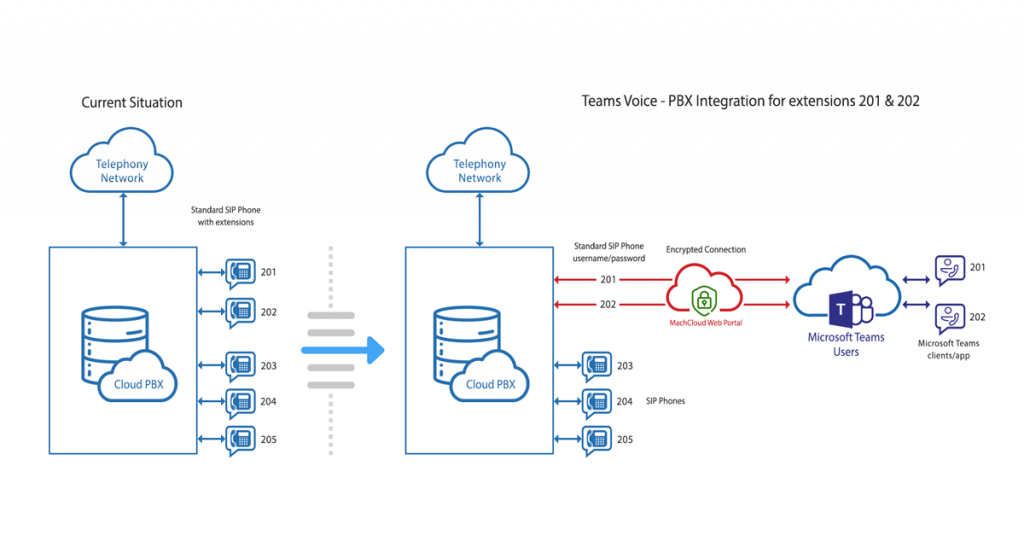 It is not required to migrate all PBX users simultaneously to Microsoft Teams. Users who are not ready simply continue to use the PBX system as before. Important to know is that MachCloud Solution for Microsoft Teams does not make any changes to the PBX configuration, SIP trunk or external telephone numbers.

Microsoft Teams built-in PBX functions are limited and by far the most important reason why companies do not consider migrating. A short comparison:

What licenses are required?

MachCloud Direct Routing Connector, you can choose any Microsoft license:

MachCloud User license for Microsoft Teams. You can choose out of these Microsoft licenses:

What does it cost?

What are the prerequisites?